A Story in Stone

The documentary A Story in Stone follows a small cadre of artists who, following the techniques and procedures of the 1700s, are doing all they can to save an endangered art form: stone lithography. These artists include Jim Reed, who operates from his studio in Bridgeport, Connecticut, and who is working to keep the stone lithography process alive.

Stone lithography is perhaps best known for being used to create distinctive posters that advertised the Parisian nightlife of the Moulin Rouge era. Fast forward 125 years and lithographs have provided a way for people to access original artworks created by great artists. 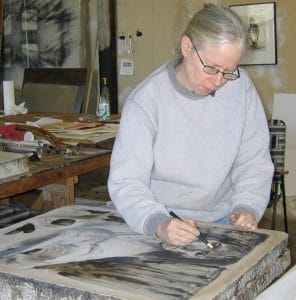 In A Story in Stone, meet artists like Jim, see interviews with the “first family” of stone lithography, and explore this age-old process, including one of the most fascinating aspects of the art form: the Belgian stones that serve as canvas, printing bed, and reusable tool during the process.

A Story in Stone is produced by award-winning Connecticut-based filmmaker Frank Borres and his crew at Borres Productions. Its executive producer is Dan Makara, an artist himself who fell in love with the art form of stone lithography and wanted to share its story!