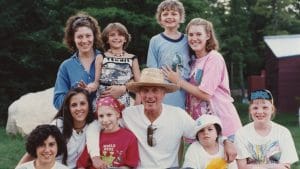 In 1988, actor and philanthropist Paul Newman opened The Hole in the Wall Gang Camp in Ashford, Connecticut, a free camp where children with serious illnesses could escape the fear and isolation of their medical conditions. Three decades later, there are 30 camps and programs around the world united as SeriousFun Children’s Network. Go inside the story of SeriousFun with the new documentary A World of Possibilities: SeriousFun Children’s Network.

The half-hour documentary explores the SeriousFun mission – which, to date, has delivered more than one million life-changing camp and camp-inspired experiences to children living with serious illnesses and their families – providing a diverse range of inclusive programs designed to help kids “kick back and raise a little hell.”

The film focuses on three intertwining stories: that of a camper, a volunteer, and the evolution of one SeriousFun camp. Through these stories, discover how the camps and programs of SeriousFun provide a unique place for children and families to feel included and understood – and see how Newman’s passion for helping others contributed to a global, ever-expanding community up to some serious good!

With Special Appreciation to Paul Newman and Newman’s Own

For more information on SeriousFun Children’s Network, visit their website>>