The eighth season of Finding Your Roots with Henry Louis Gates, Jr. comes to CPTV in January 2022!

Season 8 features 10 new episodes showcasing guests who have excelled in a wide array of fields, each with ancestral stories that touch on the human experience and bring insight into how they became the trailblazers they are today.

The new season of Finding Your Roots comes to CPTV Tuesdays at 8 p.m., kicking off with two back-to-back episodes on Tuesday, January 4, 2022. 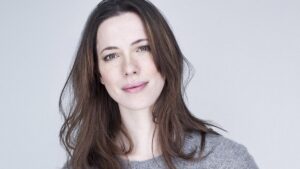 Actress Rebecca Hall is featured in Season 8 of Finding Your Roots. (Photo courtesy of Jeff Vespa) Finding Your Roots uses every tool available—from cutting-edge DNA research to old-school genealogical sleuthing—revealing long-buried secrets and hidden aspects of our shared history. Along the way, the series compiles family trees that span the globe—from the United States to South America, Europe to Africa, Asia and more. Episode to episode, audiences will meet guests’ ancestors who crisscrossed the globe to become businesspeople and bootleggers, war heroes and criminals, farmers and factory workers, all the while persevering under the most extraordinary circumstances. Together, the arc of each guest’s family personalizes history while emphasizing the human connections that unite everyone.

At the center of it all, guiding every discovery, is host and executive producer Henry Louis Gates, Jr., the Alphonse Fletcher University Professor at Harvard University and director of the Hutchins Center for African and African American Research.