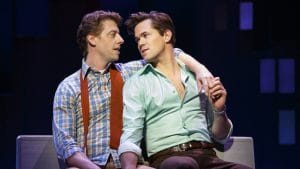 Live From Lincoln Center broadcasts world-class performances from the stages of Lincoln Center into homes across America. The pioneering series has sought to democratize the performing arts.

Now, Live From Lincoln Center features Falsettos. Nominated for five 2017 Tony Awards, including Best Revival of a Musical, this musical theater landmark offers a hilarious and poignant look at middle-class family dynamics revolving around the life of a gay man, his wife, his lover, his soon-to-be bar mitzvahed son, their psychiatrist, and the lesbians next door.