Masterpiece to Premiere Thrilling New Drama The Collection in Fall 2017 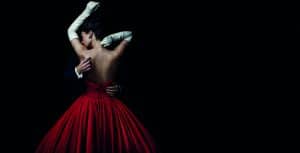 Dressing up has never been so dazzling—or so dangerous! Don’t miss The Collection on Masterpiece, a new seven-episode drama coming to CPTV Sundays at 10 p.m. beginning October 8, 2017.

Richard Coyle (The Fall), Mamie Gummer (The Good Wife), and Tom Riley (Da Vinci’s Demons) star as a family struggling to build a fashion empire at any cost.

Set in post-World War II Europe, Paul Sabine (Coyle) is restoring Paris as the fashion capital of the world. His dresses are a sensation, and only his shady past and an inconvenient corpse block his way to success! Paul is joined by his wealthy American wife, Helen (Gummer), and his brilliant but dissipated designer brother, Claude (Riley). The Collection also stars Frances de la Tour (the Harry Potter films) as Paul and Claude’s overbearing mother, Yvette, who will stop at nothing to advance her boys’ careers—often to their dismay.

Other colorful characters include Jenna Thiam (The Returned) as Nina, the seamstress with a secret and a future in modelling; Max Deacon (Hatfields & McCoys) as Billy, an American photojournalist on a mission to record the vitality of postwar Paris; and Alix Poisson (Last Love) as Charlotte, the ambitious head saleswoman at the Sabine studio. Also featured is Michael Kitchen (Foyle’s War) as Paul’s mentor, Frederic Lemaire.

Into the superficially elegant fashion world comes hard-boiled American reporter Stan Rossi (Stanley Townsend, The Tunnel) with suspicions about Paul’s past. Then, when one of Yvette’s schemes goes awry, Police Inspector Bompard (Allan Corduner, Homeland) enters the picture—leading to an investigation that threatens the entire Sabine enterprise! Who knew fashion could be so cutthroat?