CPTV, in conjunction with Parkville Sounds, takes musicians on a guided tour of the Hartford neighborhood of Parkville, sharing unique stories of how this area is being revitalized by emerging creative businesses. The four-part music series The Parkville Sessions showcases live music, unique stories of the historic neighborhood, and the artists who use the empty factories to ignite creativity! Wild Adriatic
Rooted in the rowdy spirit of rock & roll, Wild Adriatic has built an international audience on a combination of groove, grit, and guitar-heavy swagger. With the power trio’s newest album, Feel, bandmates Travis Gray, Rich Derbyshire, and Mateo Vosganian update the sound of their influences — from ’70s rock to Motown to soul — for a contemporary audience, taking influence from the past but never losing sight of the present. The Telle
The Telle is a synthpop duo comprised of Tim Walsh (The Stepkids) and Gabrielle Lakshmi. The duo released their first two singles — “Someone I Know” and “Love Magnified” — in 2016, and their first music video, “Say,” in 2017. Prior to their collaboration, they performed individually in various ensembles around the U.S. and internationally. From that experience, they created an engaging live show in which the music is accompanied by an interactive light show, while Walsh and Lakshmi move between keyboards, bass, guitar, and electronic drums. It captures the depth of Lakshmi’s vocal prowess and their collaborative, improvisational spirit. 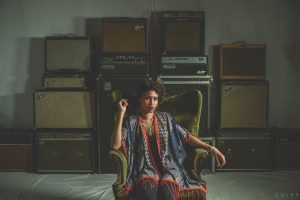 Funky Dawgz Brass Band
The Funky Dawgz Brass Band is one of the premier touring acts on the live music scene today. Emerging from Connecticut, these young men have engulfed the spirit and traditions of New Orleans, and earned the respect of local musicians who grew up and reside in the city. It is impossible not to enjoy yourself during a show as they play a contagious upbeat mix of traditional New Orleans R&B, original music, hip-hop, funk, and today’s top hits with a brass twist. They have toured both nationally and internationally, and have been featured in all corners of the live music scene.